Nowhere to Escape in Penang 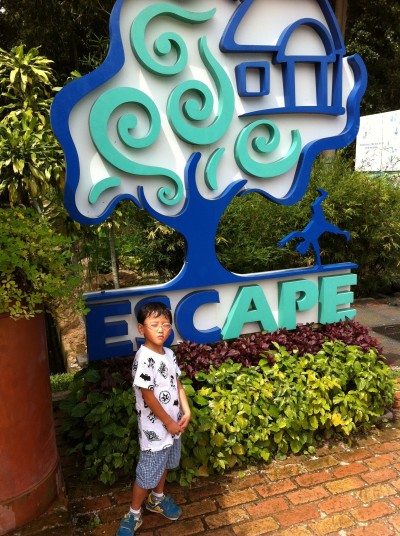 The short trip to Malaysia was never meant for Pangzi. After a few days of eating, shopping, sightseeing and chilling by the beach – exactly what a Penang tour should be and nothing else – he became extremely restless.

“Daddy, why are we in Penang?” Pangzi asked in the cab on the way back to the hotel.

“I’m here to enjoy myself. I don’t know why you’re here with me. Maybe because I can’t leave you at home alone,” I replied.

“But this is Penang, not Orlando,” I said confidently. This was a well-prepared answer in my FAQ.

At this point, the stupid cab driver had to intervene. “Penang has a new theme park called Escape! It’s lots of outdoor fun for the kids!”

I was taken aback. That wasn’t what I’d expected.

Uncle, I think your job is to just drive and stay quiet!

“Escape! I want! I want!” Pangzi got excited, for the first time in days. “But we’re flying back to Singapore tomorrow. There’s not much time…”

Again, the stupid cab driver couldn’t keep to himself. “I can pick you up first thing in the morning. Your flight is in the afternoon, no?”

“But I don’t have much Ringgit left,” I said, pleased with my astute cashflow management.

“Oh, you can pay by credit card!” said the stupid cab driver. So there was no escape for me eventually. The next morning, we found ourselves in touch with nature at this new theme park which let the restless one release all his pent-up energy in two hours.

One word said it all: climbing.

There were plenty of ropes at each station. The harder obstacles came with safety harnesses. One of the most popular games was called Tubby Racer, a bigger version of Luge at Sentosa. Another involved swinging from tree to tree like Tarzan, but too bad Pangzi didn’t meet the age requirement. 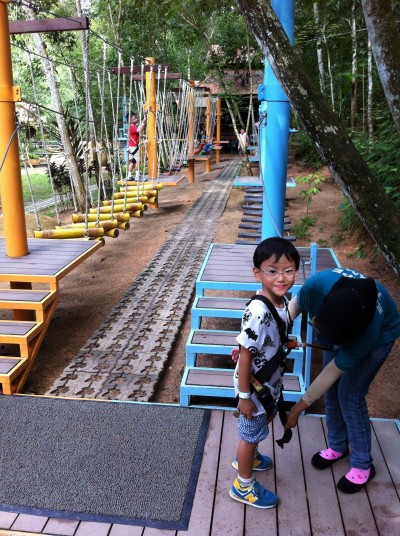 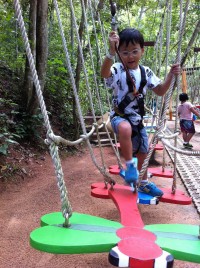 He did however clear the mini obstacle course that ended with a safe flying fox. In time to come, I’m pretty sure he won’t be enjoying the real thing as much when he joins the army.

Helpful and courteous attendants were on hand to help the little ones with their tasks at the stations. Pangzi nearly fell on one as he tried the tree scaling. 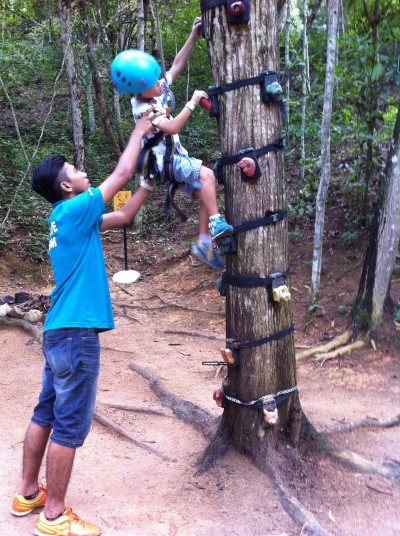 Before we left, he even managed to race on a tiny go-kart rink. We went back dog-tired. Not my idea of a relaxing holiday. I’m sure this is all Pangzi would remember of the Penang trip.