Is Singapore’s famous prison in Changi actually a giant playground?

There are days you just want to rough up your kid, stuff a rag into his mouth and tie him to a chair.

On one of such days, thankfully I discovered Changi Airport. Where else in Singapore can you find a place large enough to engage (encage?) your kid for hours.

Changi Airport may be known internationally for its world-class service, but to me it’s also the best prison around.

Once stuck inside, kids can help themselves to all sorts of indoor nonsense which they call play.

Like when Pangzi hopped onto a luggage car and made me push him around. What would you call one of those – cart, stroller, trolley? Nevermind, to him it was his Porsche. And me, the poor driver. But guess what… he couldn’t get far on it at this playground. 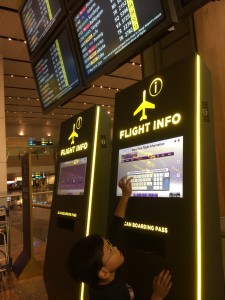 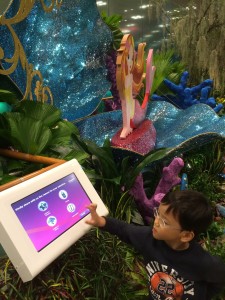 There were also mega screens for him to practise typing and swiping on. I just needed to fool him into thinking they were bigger iPads. Very few people were using them for their original purposes, but even if he was preventing legitimate users from say checking flight schedules, I’d simply give them the shrug. Kids, you know.

Changi Airport seems obsessed with these kiosks, which even extend to every toilet asking users for feedback on their peeing experience. I just thought it’d be a complete waste of resources if not for the kind patronage of curious kids. For Pangzi, a worshipper of all objects that could move, a pilgrimage to Changi Airport wouldn’t be complete without a Skytrain ride. Think of all the time you could while away getting from T3 to T2 to T1 and back to T3. 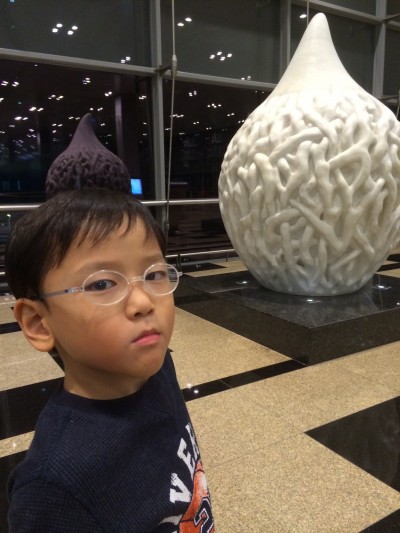 Near the T3 Skytrain exit were structures apparently designed by some big-shot artist. Personally I liked them very much. Even managed to trick my son into posing in front of one. However, he just went, “Daddy, why do you want to shoot dabian?”

At B2, Pangzi reached the playground, which was a bit closer to his tastes. To my relief, he went crazy there, even though it wasn’t very big. Come to think of it, not everyone in Singapore could offer an air-conditioned indoor playground – free of charge. 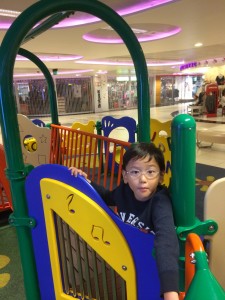 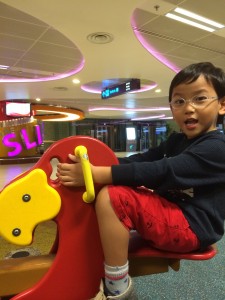 A ridiculous metallic slide let kids jump two floors down without committing suicide. I didn’t find it too clever. Was I supposed to be at the upper level sending my kid to his terrifying leap? Or at the basement playground waiting for him to tumble down, all freaked out? 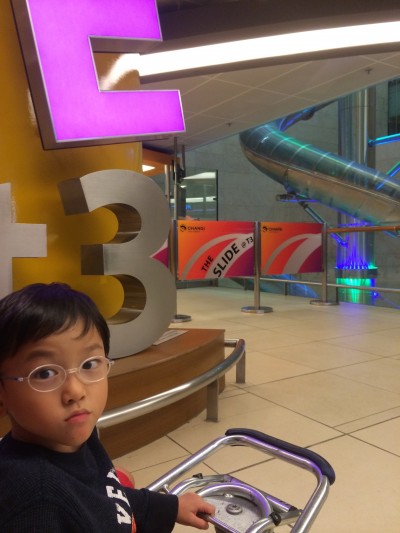 Often, Changi Airport would set up kid-friendly themed exhibitions, especially within the generous confines of the T3 departure hall. This time, they were trying their naive best to sell Indonesia as a worthy tour destination. As far as I could see, the keenest visitors were – again – children, with all the purchasing power of a praying mantis. But who’s complaining. 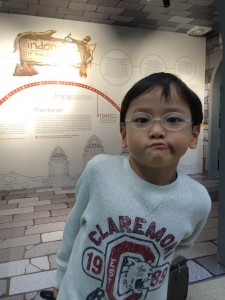 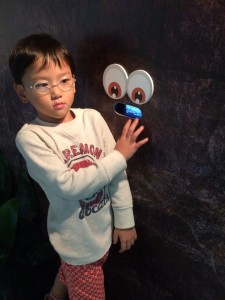 I didn’t plan for him to gain anything from the booths, but he actually learnt how to make music with traditional drums. Maybe he was only trying to beat the living daylights out of the snake.