All that jazz at Esplanade

“Do you want to see a really big durian?” I asked Pangzi.

“Then, do you want to visit a musical library?”

“So, do you want to eat sweet corn by the river?”

It’s Jazz in July at Esplanade – Theatres On The Bay, with free concerts at the indoor concourse area or the outdoor amphitheatre every evening throughout the month. Yes, every evening.

Dream come true for all the jazz lovers in Singapore that I know… except Pangzi. 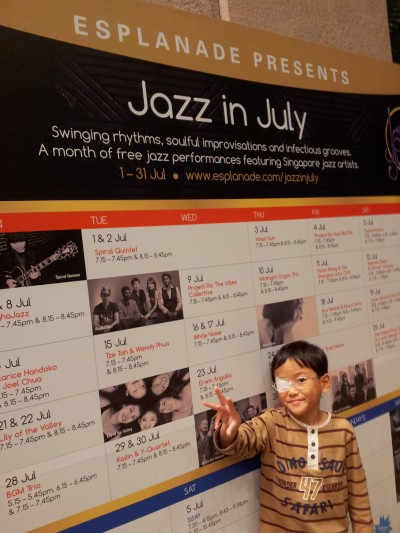 Looking at the lineup, it promises to be a mouthwatering journey. Given how small the jazz community in Singapore is, I think Esplanade has invited the whole gang to perform here. It’s good to know there’s an emergent crop among some of the more familiar faces. From big band to bebop, there’s something for every aficionado… except Pangzi.

Well, I’m not passing up the chance to go, just because some five-year-old thinks he’s too young for the female jazz singers. I’m sure some of them would fancy him when he’s reached puberty.

I discovered the festival too late, but there were still two weeks of jazz performances ahead to imbibe. The first one we went for didn’t disappoint. I didn’t know who Dawn Wong was at first, but I was pleasantly surprised. Such clarity in her voice.

However, it proved to be a disaster as far as the little one was concerned.

“But you’re already here. Just keep quiet and listen,” I told him sternly.

He couldn’t sit still. There went any hope of returning for more, I thought.

Then hope sprang when I saw who was up next over the weekend. 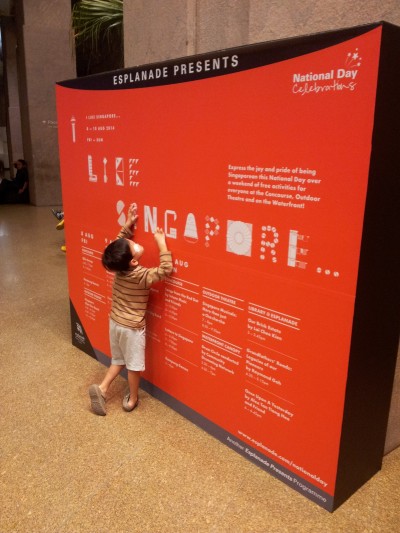 “Hmmm, do you want to see McQueen?” I asked Pangzi.

I’m not looking forward to what’s going to happen when he finds out it’s not that McQueen.